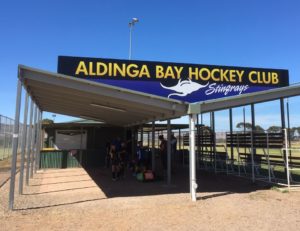 As the only Hockey Club within the City of Onkaparinga – itself the largest City Council in Adelaide – the Aldinga Bay Hockey Club punches above its weight in terms of flying the flag for field hockey on the Fleurieu, and in producing representative players at regional, state and national level.

Originally established as the Willunga Hockey Club in 1977, a change of location in 1995 saw the formation of the Aldinga Bay Hockey Club.

The Club works closely with the City of Onkaparinga Council to ensure the best possible playing surface for the sport, and for other sporting groups and members of the public who also use the facilities.

The Club, in fact, actively encourages and welcomes the use of the field when not in use by its members. This has led to a few problems for the Club, where a small number of irresponsible dog owners have used the fields, when they are fully enclosed, as a de facto off-leash area and left the playing area littered with dog droppings for the Club to clean up.

Steve Quick, Vice President of the Aldinga Bay Hockey Club, stresses that the majority of dog owners who use the fields to exercise their dogs behave responsibly and use the “doggie bags” provided to clean up after themselves but, as is so often the case, there are always a few bad apples who spoil it for the rest.

Steve said that the Club will soon be installing new signage to remind those using the fields to leave them as they found them.

Aldinga Bay Hockey Club prides itself in offering active participation opportunities in a relatively low-cost sport, and providing a family friendly, safe and supportive environment to its members.

The Club also recognises its place in and importance to the local community, hosting events and activities in the region and supporting the community by conducting training clinics and development programs in local schools, offering children an alternative to the mainstream sports currently available.

Hockey may be an internationally recognised sport played at the Commonwealth and Olympic Games level, but it has its roots in local, community organisations like our own Aldinga Bay Hockey Club.

The Winter Hockey Season commences in late April, and the Club is planning free introductory events for those who are interested in taking up the sport.