An article for dog lovers written by Bernice Wuttke 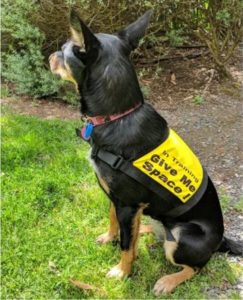 The Yellow ribbon/bandana/cape has an interesting history. It’s the brainchild of Terry Ryan who established this signal in her Legacy camps and classes. It was introduced into Australian Dog clubs in early 2000 by Pat Robards who asked Terry if she could borrow her idea for her shy dog Bo.

In 2012, a friend of Eva Oliversson, Dog behaviorist in Norway – Mimmi Engh, read about the use and benefits of a yellow ribbon on dogs.   She wrote to Dog clubs in Australia who used them with sensitive dogs at their courses for some years. In June 27 2012 Eva Oliversson launched the program… the Swedish International Gulahund™ Yellowdog.

Do you know what a yellow ribbon on a dog or dog’s leash means? You as a dog owner need to know how it should be used and about its purpose before using these signs. It means this dog needs some space! Just like an amber traffic light, a yellow ribbon is a signal to proceed with caution. It’s to help people, especially children to easily identify that the dog needs to be approached slowly and that any interactions should be discussed with the dog’s handler before attempting to pat the animal.

The yellow ribbon is not necessarily a signal that the dog is aggressive. There are several of reasons why a dog may use a yellow ribbon. It could be that the dog has health issues, the dog is in training, is being rehabilitated/learning to socialize, or he/she is scared or reactive around other dogs. Similarly, there are many reasons why some dogs need more space! They may be ill, hurt or just old. The dog may have a new family or have a tendency to become over excited.

WHAT IS IT? The yellow ribbon is a quick way to communicate the comfort level of a dog, avoiding triggering unnecessary panic or stress that can cause unexpected and unpleasant outcomes for everyone involved.

WHAT IT ISN’T? It is not an excuse to avoid proper training; it is not an admittance of guilt or a confession regarding a dog’s behavior; it is not an indication of a dog who has a poor temperament; and it is not a waiver of responsibility.   This program is not about or for aggressive dogs. Dogs that bite must wear a muzzle. You cannot replace a muzzle for a yellow sign on a dog that, whether you want to use the yellow signs, or not.

We have had Kelpies as part of our Family since 1971. Prior to 2005, we did not need to use Yellow Bandana’s as our previous Kelpies were not reactive when other dogs were ” in their space.” We rehomed Cola in 2005. She was 2 yrs old. Her upbringing was far from being desirable and she came to live with us with quite a bit of baggage. Training her was the best decision made.

It was at this time that I became aware of Yellowdog Australia. Having a Bandana for her showed people that she needed space. In 2007 Bundy became part of our Family. He was 4 yrs old and he also came with baggage. He also wore a Bandana and was taken to training. In 2014, Boo came to live with us. She was 4 yrs old and was extremely reactive due to her previous circumstances. Boo wears a Bandana when she is at training. A meeting not to be missed