At the invitation of Karl Telfer and Georgina Williams, Senior Custodians, some of the leading environmental groups in the Willunga Basin gathered recently for a full moon meeting at Lot 50-Kanyanyapilla, McLaren Vale, to develop a plan of action to protect and preserve The Washpool, a unique local nature reserve.

SA Water, which owns a large parcel of land at The Washpool, recently announced plans to sell its property on the open market, a move which generated a wave of protest across the region.

Georgina Williams, Nganki burka Senior woman, stressed the cultural significance of The Washpool, and its key role in the Tjirbruki Trail creation narrative.

The various parcels of land that make up The Washpool are currently owned by a variety of Government Departments, and locals have been agitating for many years for all the titles to be consolidated, and the land dedicated as part of a greater Aldinga Scrub Conservation Park.

The meeting voted unanimously to continue lobbying and agitating for the preservation of The Washpool, and to make a direct appeal to the Premier (and Minister for Aboriginal Affairs) Steven Marshall for his personal intervention. 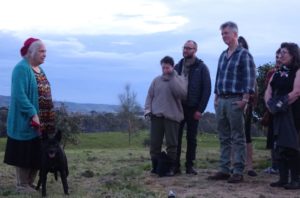 Dreaming of a green Christmas Are you ready for extreme weather?