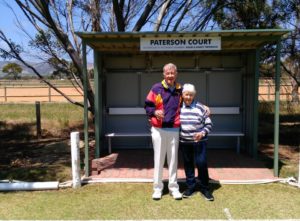 On Wednesday 6th November 2019 a ceremony and lunch was held at the Aldinga Bay Croquet Club to dedicate and name Court 1 the “Paterson Court”.

Brenda Pentland, President of the Aldinga Bay Croquet Club, welcomed approx. 38 guests and old players. Apologies were received from Amanda Rishworth – Federal Member for KAURNA (Amanda sent an email saying that she was regrettably unable to attend and sent her well wishes to the club), Rebekha Sharkie – Federal Member for MAYO, Erin Thompson – Mayor of the City of Onkaparinga, 2 ex members and Sally Brown – Secretary ABBC.

Followed by an address by Bob McMillan – Treasurer of the ABCC.

Dean and Nancy Paterson moved to Aldinga from Port Pirie in 2000 and built a house in Aldinga. They were both croquet players intending to join the Victor Harbor Croquet Club. The Aldinga Bay Bowling Club was enquiring about the possibility of croquet players making use of their second green because they could no longer afford to maintain it. This meant that Dean, currently a member of the SA Interstate Croquet Team since 1990 and having won the Australian Open Singles in 95 would not need to travel to Victor Harbor to practice, so negotiations were made to start a brand new club in the South.

Membership quickly grew until the time had come when we needed our own full sized courts and Dean lead the way. With the help of government grants etc we raised the funds and with the hard work of our members our new courts were opened on the 28th March 2012 by John Hill the then member for Kaurna.

Nancy gave up croquet several years ago due to ill health and Dean still plays but not as often now.

Members and invited guests then charged their glasses and went in for a light lunch.