Pat produced her fortnightly film review “Images in the dark” over 8 years. Even when living in a nursing home with her leg amputated, she would go out in her wheelchair, see movies and write a reviewed for us.

She knitted many hundreds of finger puppets and many Nursery rhyme poppets and scenes all of which she gave away. Aldinga Primary School is lucky enough to have a set which the teachers use in the liberty to teach year one and two students. 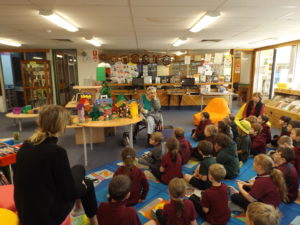 Pat is a retired school teacher and, in her early days, was an Olympic gymnast and dance instructor. She has been involved with theatre most of her life, acting, writing, directing and producing many plays and pantomimes working with Opus performing arts and the Fleurieu art community.

Pat is now 84 living in a nursing home having lost her leg because of diabetes. To keep her mind and hands busy she knits. The knitting she presented to Aldinga took just over four weeks to create.

She has presented a set to Mitcham primary school, too. That set has been on display at four nursing homes, three libraries and the Hopgood theatre.

Pat has made puppets for trauma therapy and this year has given 150 to the Salvation Army for sale at their stores. Have your say – Main South Road